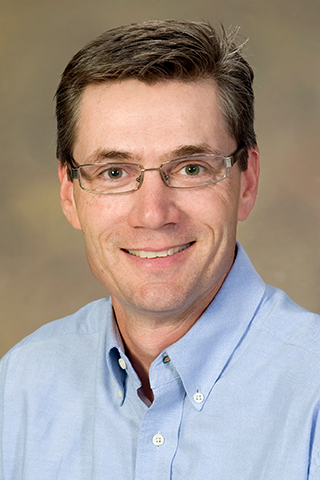 Dr. Paul Myrdal was born in Madison, Wisconsin on June 25th, 1967, the beloved child of Barbara and Gerald Myrdal. He grew up in Madison with his three siblings and graduated from Madison Memorial High school in 1985. Paul attended the University of Wisconsin at Madison, where he met his future wife, Kelly Jo Koch in freshman chemistry class. Paul moved to Arizona during college and graduated with a BS in Molecular and Cellular Biology from the University of Arizona in 1989. Paul and Kelly married in 1992 in Madison, Wisconsin at the site of their first date. Paul went on to earn his Ph.D. in Physical Pharmaceutical Chemistry from the University of Arizona in 1994, and completed a post-doctoral fellowship in 1995. Paul and Kelly welcomed their first child, Caitlyn, while living in Arizona. After completing his Ph.D., Paul and family moved to Minnesota where Paul worked as a pharmaceutical scientist for the Minnesota Mining and Manufacturing Company (3M) in the Drug Delivery Systems Division. He was awarded 3M’s Technical Circle of Excellence in 1998. During Paul and Kelly’s time in Minnesota they welcomed the birth of their son, Hunter. Paul and Kelly moved back to Tucson in 2000 after Paul joined the College of Pharmacy at the University of Arizona as an Associate Professor in Pharmacy Practice and Science. Dr. Myrdal contributed significantly to pharmaceutical science throughout his professional career and authored more than 80 peer reviewed publications and nine book chapters on a variety of aspects of analytical chemistry, solutions, solid state characterization, formulation development, and drug delivery. Paul was highly esteemed in his field and loved by his colleagues and students. He was dedicated to his pharmacy and graduate students and honored to contribute to their lives and education throughout the years. He was also very proud to be a member of a strong, brilliant, and supportive academic family and especially appreciative to his mentor, Dr. Samuel Yalkowsky. Paul will forever be remembered with great love and affection by his wife of 25 years, Kelly, and his two beautiful children, Hunter (20) and Caitlyn (23). Paul will also be remembered fondly by his parents, Barbara and Jerry; his sisters Kristi Reprogle and Michelle Chudy, his brother Gregory Myrdal, his brothers-in-law Mike Reprogle, Matt Chudy, and Chris Koch, his sister-in-law Kathyrn Koch, his nephews Joshua Reprogle, Jake Chudy, and Eben Koch, his nieces Lindsey Reprogle, Jessica and Annika Chudy, and his mother-in-law, Sharon Koch. Paul’s greatest legacy and joy were his wife, children, family, friends, work and the outdoors. He loved fishing and hunting, cultivating the plants in his gardens, hiking, working around his house, taking trips with his family, and enjoying the people around him. The motto that he left to his family was “be generous and be kind; always” and he lived by that expression every day. Paul was supported throughout his illness by his family and friends for whom we are forever grateful. He left us too soon and will be fiercely missed by those whose lives he touched.

To contribute to the Memorial Fund, please use this link or indicate on the donation form that your gift is in memory of Dr. Paul B. Myrdal. All donations to the Dr. Paul B. Myrdal Memorial Fund for Pharmaceutical Education will support AFPE’s Gateway Fellowship, which funds mentored research projects for B.S. and Pharm.D. students, and the Pre-Doctoral Fellowship, which supports mentored Ph.D. candidates’ research projects.

The 2020-2021 Dr. Paul B. Myrdal Pre-Doctoral Fellow is Mansour Dughbaj, a University of Southern California student researching “Design of Protegrin-1(PG-1)-based Cyclotides as a Therapeutics for Cystic Fibrosis Infection and Inflammation. ” He explains:

“The search for novel antimicrobial agents is dire due to the escalating prevalence of infections involving antibiotic resistance bacteria in the lungs of patients with cystic fibrosis (CF). CF is the most common Caucasian life-limiting genetic disorder and is characterized by a vicious cycle of airway obstruction, microbial infection, and inflammation. Microbial infection is one of the significant drivers of CF lung disease, antibiotics are responsible for a momentous increased survival in CF patients; however, pathogens render CF treatment ineffective by evolving antibiotic resistance. Chronic microbial infections exacerbate airway inflammation leading to lung injury and progressive loss of lung function. Hence, research into new safe and effective antimicrobial and anti-inflammatory therapeutics discoveries are critical for the treatment of CF lung disease. ”